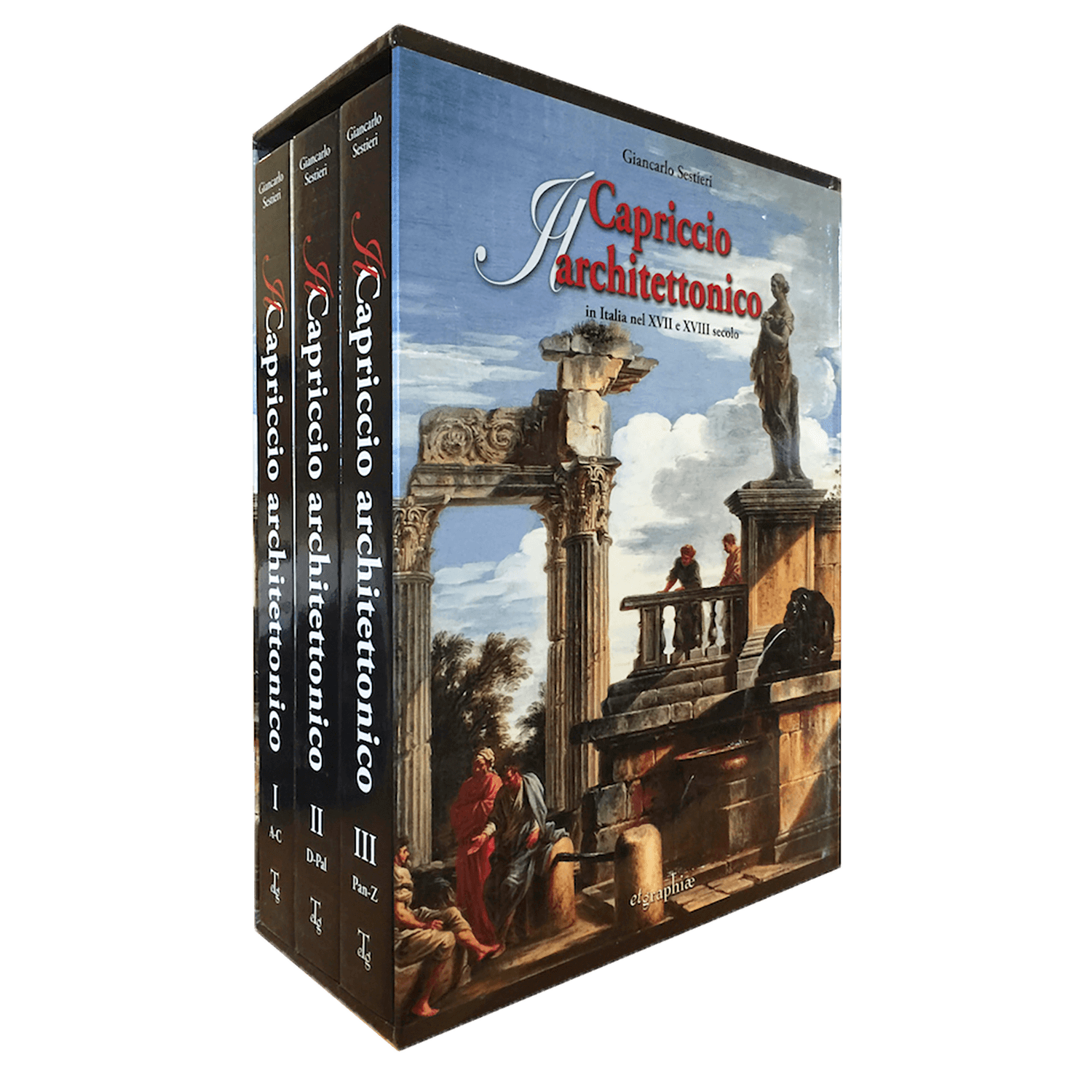 Historian Giancarlo Sestieri has just published the definitive work on the genre of paintings known as Architectural Capricci, or architectural ruins paintings. Piraneseum’s Capriccio with Figures Among Roman Ruins, by Giovanni Ghisolfi, was selected as the cover image of Il Capriccio Architettonico: in Italia nel XVII e XVIII secolo, 2015, Rome.

With over 1200 photos, these three definitive volumes constitute the best and most comprehensive Art historical treatment ever undertaken of the subject of 17th and 18th century Italian architectural ruin paintings. Author Sestieri, the world’s leading expert with this fascinating and surprisingly influential genre of painting, writes in insightful ways about the history of this essentially Baroque phenomenon, and its artistic twists and turns, including the work of its most well-known practitioner, the 18th century Roman vedutista, Gian Paolo Panini, whose canvases at auction today can bring millions of dollars.

Sestieri’s deep research has also brought to light the accomplishments of many significant capriccio painters – Giovanni Ghisolfi, Gennaro Greco, Leonardo Coccorante, Pietro Paltronieri, etc., etc., whose work has been overlooked, nearly forgotten over the past two hundred years. Importantly, for those interested in Modern Art, professor Sestieri lays out the integral role of Italian capricci in the entire development of painting from the 17th through the late 19th century, including the ways French Impressionism relied on Venetian artists (and ruins painters) such as Guardi and Canaletto; whose Art, in turn, relied upon both Roman and Neapolitan capriccio painters. With some painters, their influence on later artists and effect on the course of Art may be just as important as their own work.

Historian Rudolf Wittkower writes of Giovanni Ghisolfi (Milan 1623 – 1683), “… he made his fortune as Italy’s first painter of views with fanciful ruins.” These views – called capricci or veduti ideate – became a distinct genre in Italian painting, stretching over a century and a half. Adds Wittkower, “Rome had at least one great master (Gian Paolo Panini) who raised both the vedute esatte and vedute ideate (exact and imaginary views) to the level of great art … (O)ne cannot doubt that he received vital impulses from the precise art of Giovanni Ghisolfi, whose vedute ideate show the characteristically Roman scenic arrangements of ruins.”

Nobly born in Milan in 1623, his father an architect, and trained in architectural painting by his uncle, Antonio Volpeno, Ghisolfi travelled to Rome in 1650. There, he struck up a friendship with the Neapolitan-born Salvator Rosa, described by Wittkower as the “most unorthodox and extravagant of the Late Baroque Roman painters.” In addition to working in his studio, Ghisolfi frequently collaborated with Rosa over the course of his career, the latter adding figures to the former’s architectural views.

This painting, showing robed philosophers holding forth in an imaginary setting (fig. 1), epitomizes “the characteristically Roman scenic arrangement of ruins” described by Wittkower and is a clear precursor to later work by Panini, some of it along very similar lines. Historian Giancarlo Sestieri describes this painting, -“Senza dubbio questo dipinto e uno dei capolavori in assoluto del Chisolfi” (Without doubt this painting is one of Ghisolfi’s absolute masterpieces).