A Re-discovered 17th c. Capriccio By Giovanni Ghisolfi is Identified and Conserved by Piraneseum 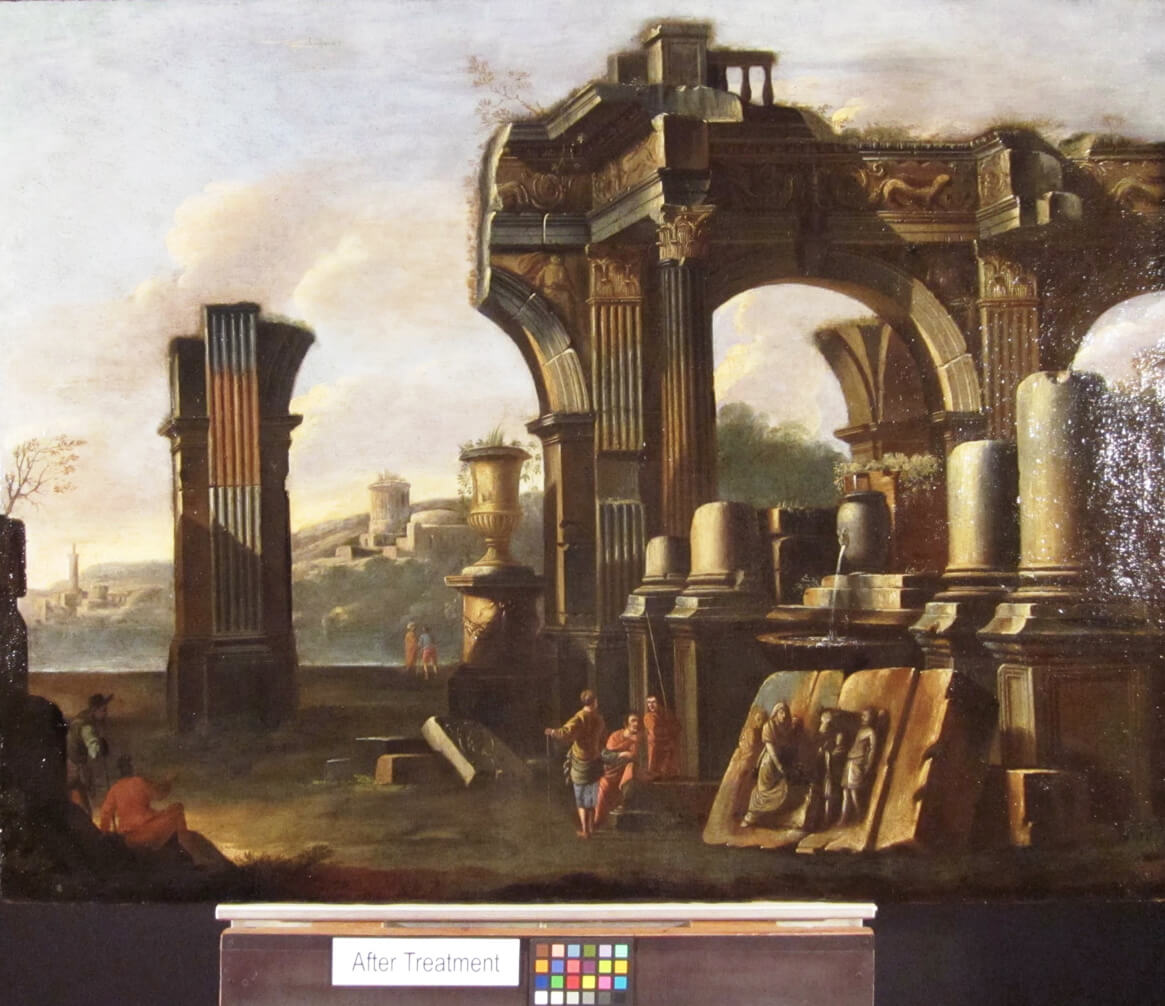 The Re-discovered Ghisolfi after careful restoration Figure 1. The Ghisolfi as we found it, prior to conservation

A year ago, in an out of the way German sale, we became intrigued with an old,  darkened, architectural canvas. Peering through the cloudy, yellowed, cigar smoke-scented varnish, we thought we made out several elements characteristic of the later 17th century Roman ruins painter Giovanni Ghisolfi (Milan 1623 – 1683) (fig. 1). Telltale signs, in addition to the picture’s skewed perspective, included skillful light to dark shading of cylindrical column shafts, a complex decorative frieze, a diminutive spout of water into a semi-circular basin, as well as figures derived from Ghisolfi’s friend and occasional collaborator, the famed, occasionally infamous, Salvator Rosa.

Figure 2. Label to the reverse side of the painting

Pulling in another direction was a handwritten label to the reverse, ascribing the work to “Giampolo Panini – Rome 1695 – 1768”; as well as noting a prior owner (fig. 2). Panini, of course, is today considered the great master of capriccio painting, and his pictures may realize significant sums at auction. In Art History, as elsewhere, things change; and in the 19th century, among some historians, Panini was counted little more than an imitator of, you guessed it, Ghisolfi. This likely accounts for the confusion with this picture’s authorship, something, as we’ll see, which continues today. Figure 3. Pauline Mohr at work on the painting’s conservation. Note the spectacles, allowing her to view the surface under magnification.

It is safe to say that, without Ghisolfi, Panini’s work would have been very much different. The younger artist carefully studied (and selectively appropriated) the older man’s work; and there are extant Panini drawings copying Ghisolfi’s capricci.

Subsequent conservation has literally brought to light a picture fully characteristic of Ghisolfi (fig. 3). And while confident of this attribution, we were pleased to see a very similar painting in Andrea Busiri Vici’s 1992 Giovanni Ghisolfi: Un Pittore Milanese di Rovine Romane, titled by her Fantasia Architettonica Romana (fig. 4). Of this picture, now part of the collection of Denmark’s National Historic Museum, where it is attributed to the even earlier capriccio painter Viviano Codazzi, Vici writes “A mio parere l’opera potrebbe essere di Ghisolfi.” – In my opinion the work could be of Ghisolfi. We concur. Figure 4. A very similar capriccio in the collection of the National Historic Museum, Copenhagen