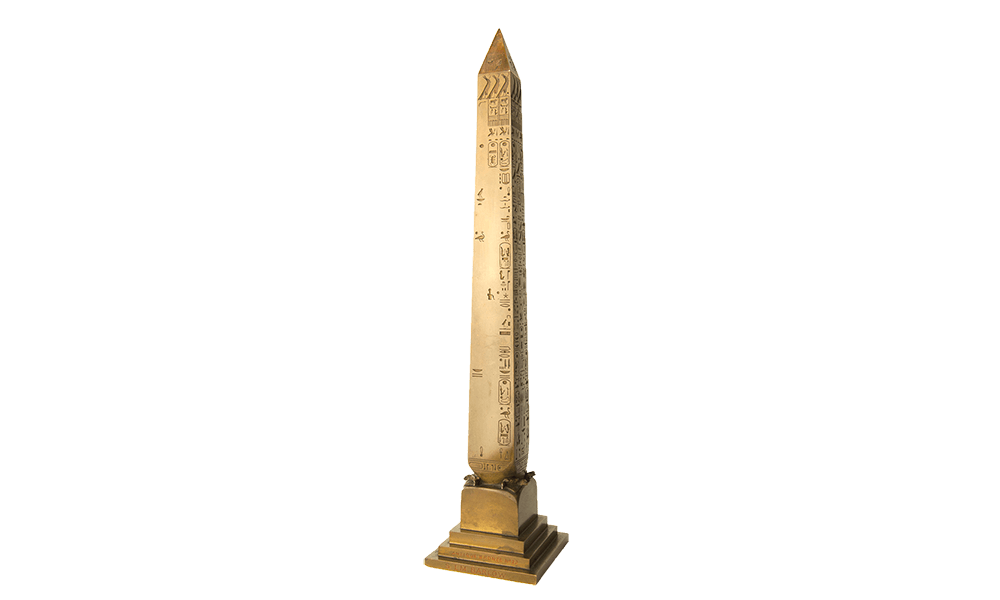 Model of Cleopatra's Needle by Tiffany & Co. cast for the opening in 1881

The Tiffany & Co. Archives contacted Piraneseum to purchase this model – for they didn’t have one! The Archives intend to assemble a collection of the most significant objects produced by Tiffany & Co., and the Cleopatra’s Needle Obelisk is one of the most historically significant examples. Charles Lewis Tiffany (father of Lewis Comfort Tiffany, who later had a different enterprise) was on the board of the Metropolitan Museum of New York. The Cleopatra’s Needle was installed in Central Park adjacent to The Metropolitan Museum, and their histories are intertwined.

In 1879, under the sponsorship of business mogul William Vanderbilt, naval engineer Henry Gorringe set sail for Alexandria, Egypt, to retrieve the ancient Obelisk of Thutmose III (soon to be called Cleopatra’s Needle) and bring the 200 ton monument to New York.

On January 22, 1881, the Needle was erected in Central Park, where it stands today. To commemorate the undertaking, Gorringe commissioned from Tiffany a small number of bronze models of the Obelisk, which were distributed to colleagues as well as those who had supported the undertaking. Little else is known about these rare and extremely finely made models.

This very highly-realized model was presented to Samuel L. M. Barlow, lawyer/tycoon/political intriguer and almost certainly an acquaintance of Vanderbilt.  The Barlow Cleopatra’s Needle was formerly the property of the National Arts Club, New York City.