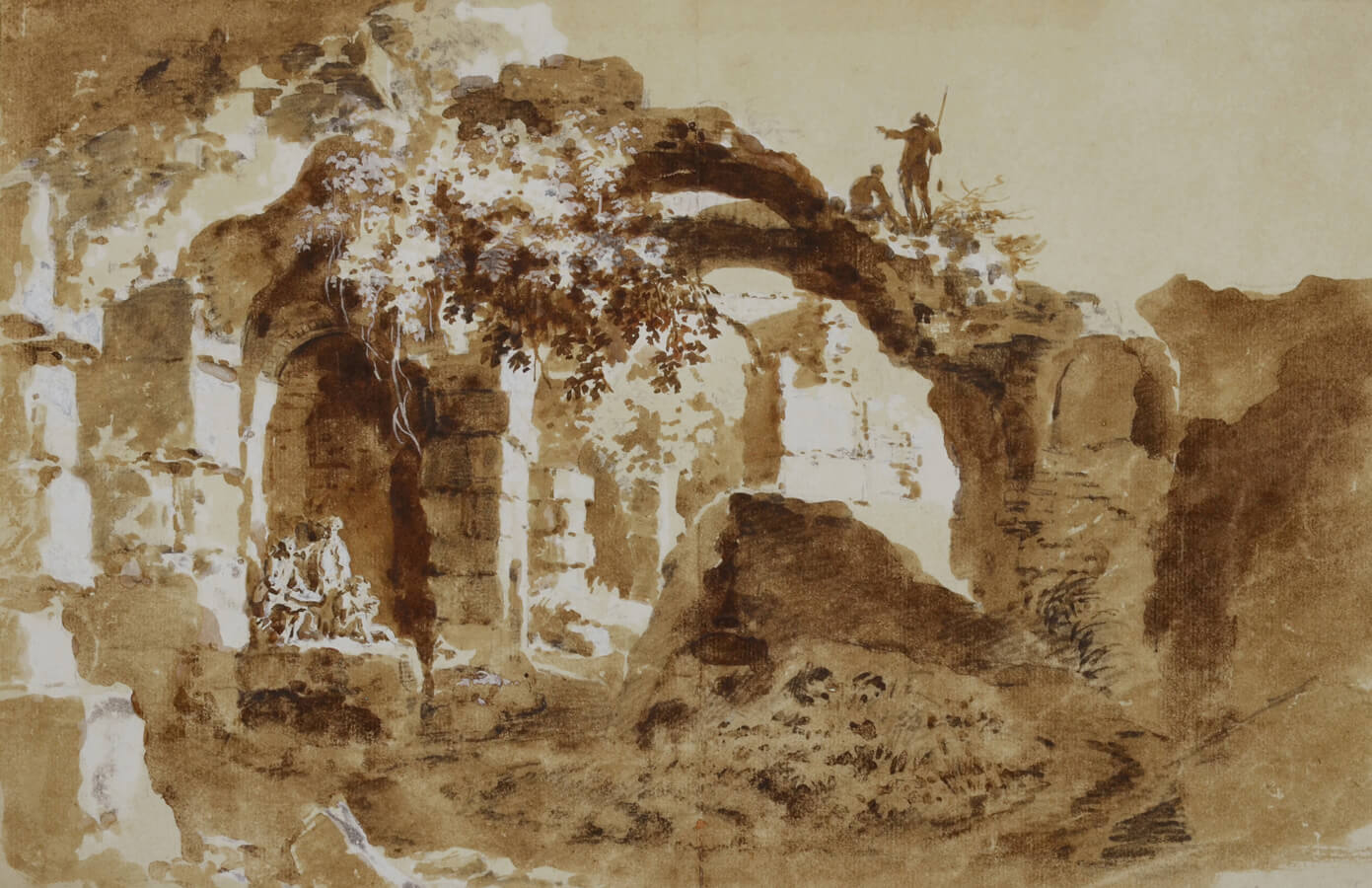 One of the most remarkable objects shown for the first time in Piraneseum’s recent exhibit, All Roads Lead to Rome (January – August 2017, San Francisco International Terminal), was this drawing. Three of the 18th century’s most highly regarded artists are recorded here together sketching, gathered within an arched niche.  Giovanni Battista Piranesi’s (1720 – 1778) 1799 biography – Notice Historique sur la Vie st sur les Ouvrages de J. B. Piranesi, Architect, Peintre et Graveur – provides an account of the master’s visit to Hadrian’s Villa, a half century earlier, in the company of two French painters – Charles-Louis Clerisseau (1721 – 1820), then a young man frest to Rome, and Claude-Joseph Vernet (1714 – 1789), a bit older, and on the verge of being recalled to Paris by Louis XV, for a project that would distinguish him as one of the great landscape painters of the 18th century.

There were distractions that Spring day, according to biographer J. G. LeGrand. Before the artists could commence sketching, they had first to dispatch the local crowd of scorpions and snakes, for which they employed fire and an axe. (The story adds context to Piranesi’s 1750 suite of Grotteschi, whose surfaces crawl with serpents and a scorpion, are congested with not quite desiccated human skeletal remains, architectural and sculptural bits and pieces and violated tombs, overrun by invasive vines, choked by fires and clouds of smoke – landscape tumbled down, pressed together over centuries – the rot of ancient civilization.) A light fold runs down the center of this sheet, revealed somewhat thrillingly by a thin line of ink gathered to the bottom of the crease. Which is to say that Vernet, that bright Roman day in late Spring (note the abundant foliage), more than 250 years distant, folded his lovely ink drawing a few minutes before it was fully dry. Perhaps it was time for the band of artists to be on their way.

“Others may know better how to paint the sky, the earth, the ocean; no one knows better than I how to paint a picture,” was Vernet’s famous claim, once he’d returned to Paris, and met with serial successes. Today, of course, this sounds a boast, its tone something we expect from a prize fighter, not an artist. And yet, in the then hyperbolic context of French commentary on the Arts, Monsieur Vernet’s words hardly overstep. Figure 2. The standing figure, almost certainly a self-portrait, bears a strong resemblance to Vernet in his 1749 “Garden of the Villa Ludovisi”

According to biographer Roger Conisbee, the figure of a solitary artist at work is common to Vernet’s drawings. Does Vernet’s drawing at Hadrian’s Villa, record some singular memorable moment? There is some evidence.

The stance, posture, physical proportions, and dress of the standing Hadrian’s Villa figure and Vernet in his 1749 painting, Garden of the Villa Ludovisi, are nearly identical, down to the just-so positioning of their tricorne hats (fig.2). The Hadrian’s Villa figure is taller than his companions and in line with the stature suggested by Louise Elisabeth LeBrun’s well known 1778 portrait of the artist.

At the standing figure’s feet, a shorter man, also tricorne hatted (and thus presumably French), works away on a small drawing on his knee. His left hand holds a small palette, his right hand (again presumably) a brush. His rounded visage, and relative nimbleness – working while seated on the stone outcrop – suggest a younger man. In the Spring of 1752, a year before the 38 year old Vernet returned to Paris, Charles-Louis Clerisseau had been in Rome just three years, and was 32. A 1762 Angelica Kauffman sketch of the artist has him with a thick physique (like the figure in Vernet’s drawing), grasping a drawing board in his left hand, leaving his brush hand free.

Vernet and Clerisseau were, at the same time, pensionnaires at the French Academy in Rome. Whilst Clerisseau was awarded the Prix de Rome in 1746, Vernet had been admitted only ’unofficially’ (through an advocate’s intervention), after arriving in Rome. Unlike Vernet, Clerisseau soon became a great friend of Piranesi, and by the 1750’s the two made multiple visits to Hadrian’s Villa. Accounts have Vernet and Clerisseau counted as friends, while Vernet and Piranesi were simply acquainted.

The left hand figure of our Hadrian’s group sits on a rock, his head and gaze turned directly towards us, rather than the ruins occupying the two French artists. This figure is attired differently than his companions – no tricorne hat, though perhaps some sort of head wear, and he wears a coat cut quite differently from that of the standing figure. He’s also drawn, unlike his companions, with dark, angular, approaching jagged, strokes, his body modeled in chiaroscuro. He holds a drawing board much larger than that of the seated figure, which he steadies with his left hand. There is no trace of a palette or brush, and we must imagine his right hand guiding a stick of black chalk. Of Piranesi’s sketching method, scholar John Wilton-Ely writes of his usual working method “…his vigorous use of red chalk over a light initial sketch in black chalk emphasizes the tonal color…”

“Wilton-Ely notes, “Piranesi’s close familiarity with the Villa dates back at least to the 1750’s, when there are accounts of sketching expeditions made in the company of Robert Adam, Clerisseau, and Allan Ramsay.” That Piranesi’s eminent chronicler does not include Vernet in this group points in the direction of it being a one-off event. Aside from their prodigious talents, the two men held in common just their respective friendships with Clerisseau. Out of this awareness and an understanding that he was soon leaving for France, might Vernet have felt prompted to paint himself and his companions into the scene – a kind of mid-18th century Polaroid?

Unlike Clerisseau and Piranesi, Vernet seems not to have taken to Hadrian’s Villa. We have located no references to other visits there, nor other drawings, nor any paintings. Perhaps it was the scorpions and snakes; perhaps it was Piranesi. Perhaps a matter of predilection. As Conisbee writes, “Vernet did not paint ancient ruins; except as an occasional landscape feature.” Perhaps this is why he pictures himself not sketching.