Capriccio with Arcade and Chapel

When we think of 18th century Venetian painters, we think of Antonio Canal (1697-1708) (aka Canaletto) and Francesco Guardi (fig. 1). This, of course, does a dis-service to a host of other artists, including Michele Marieschi, Gabriele Belli, several Tiepolos, Canaletto’s nephew – Bernardo Bellotto; Guardi’s father – Domenico, his brothers – Niccolo and Gian Antonio, and brother-in-law Giovanni Battista Tiepolo; as well as the Riccis – uncle and nephew. In Venice, in this period, Art was often a family business. Taken together, these painters created much of the La Serenissima’s extraordinarily rich and dense artistic culture throughout the 18th century.

Interestingly, it was only in the 20th century that Guardi’s work was re-appraised, understood afresh, its compositionally and spatially free-swinging, gestural, proto-abstract (say some) qualities seen as vital precursors to Impressionism and much else thought modern. (What species of narcissism is it that so often values the art of earlier times for its impact, real or imagined, upon Art now?) Such are the vagaries of Art history; reputations rise and fall – one era’s lesser light is another’s supernova, while much stardom dims.

Before Guardi’s elevation, there had been, simply, Canaletto. The most senior of the period’s Venetian painters, he directly influenced not only the younger Guardi, but every artist creating views of Venice; indeed, he may be thought to have created the idea of the Venetian view. His extraordinarily sharp eye took in, at once, the sweep of the city’s grandeur and every last contributing detail.

Guardi’s eye ran in a different direction, taking in the place’s spatial complexities; sharp plays of sunlight and shadow; extreme, askew picturesqueness, and extreme formality – all in the service of pictures which appear gestural and loosely-rendered, as improvisational as the scene at hand.

The scene in the offered drawing, a work from Guardi’s maturity, exhibits much of what renders his work so engaging – picturesque compositional richness and spatial depth; plays of light and dark; energetic, gestural strokes’ architectural formality rendered from an intimate point of view.

A guide to Florence’s Uffizi Gallery, which holds pictures by Guardi, compares the artist to Canaletto in this way – “As his style evolved, Guardi embraced a more free-handed approach to his cityscapes in comparison to Canaletto’s spatial detail. This gave Guardi a more atmospheric style that captured mood and an expressionistic view of Venice. This style was known as pittura di tocco, where he would lightly lard the canvas with a small dotting motion and airy brushstrokes.” This composition seems to have much appealed to the artist; he returned to it several times in the 1770’s and 80’s, both in drawing and painting form. Pittura di tocca is clearly seen in the small painting in London’s National Gallery, the picture to which the offered drawing is preparatory (fig. 2). Among the most interesting qualities of this painting is that it is smaller (9” x 6-3/4”) than the sketch which likely preceded it. Also interesting is its high fidelity to the drawing – the composition, arrangement of daylight and shadow, etc. are very similar from one to the other.

Another, smaller (7” x 5-1/8”), perhaps later, less forcefully and impressionistically rendered version of this drawing is in the collection of London’s Victoria and Albert Museum (fig. 3). In addition to the mentioned Florence and London museums, Guardi’s work is in the collections of the Hermitage, the Getty, Louvre, and Prado. 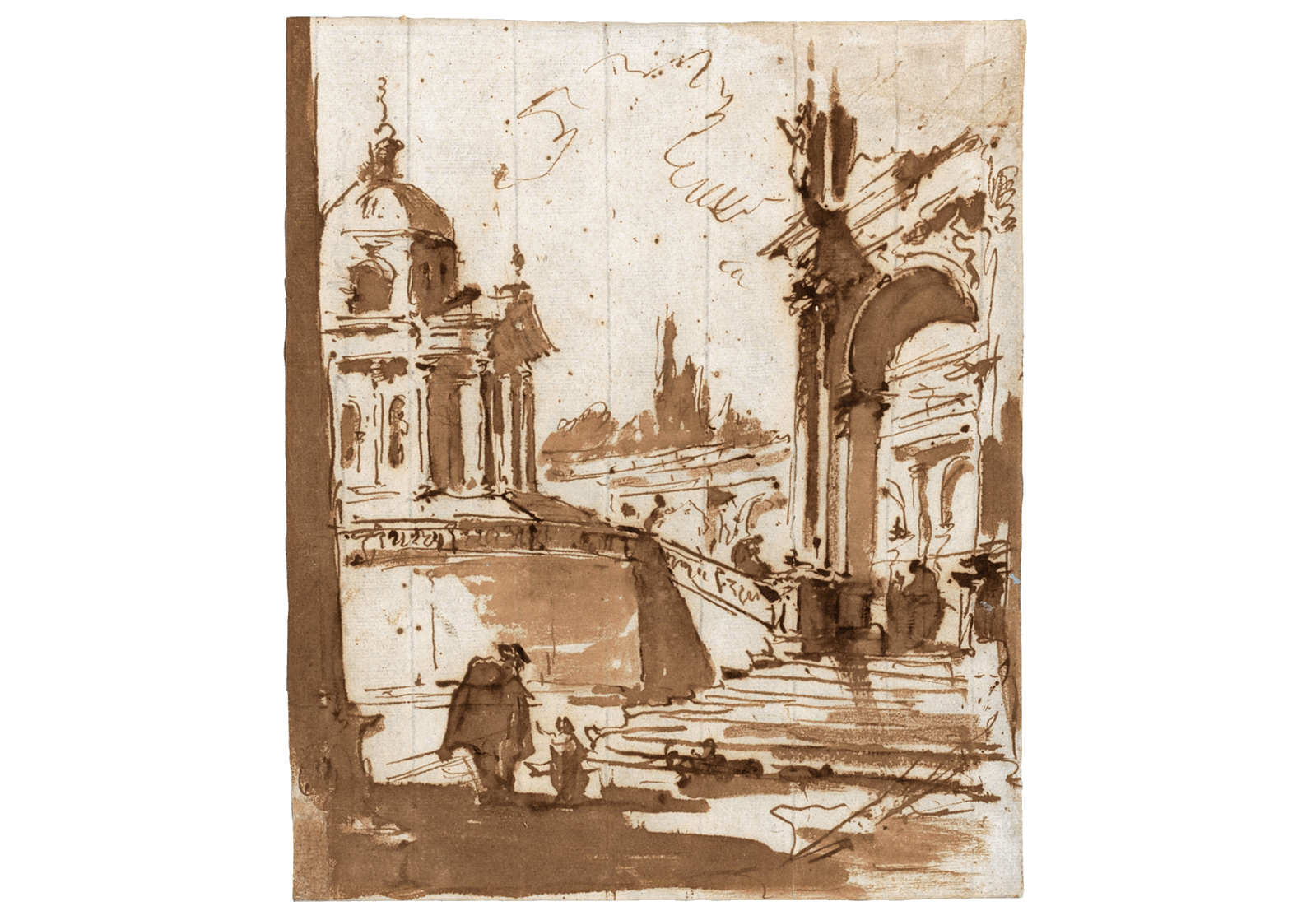