The leading maker was Luigi Valadier, son of and father to others who oversaw the family workshop. His production included highly elaborate, ornate architectural miniatures, often employed by his clientele, including Pope Pius VI, as gifts for foreign heads of state, at times those with whom the Holy See was conducting delicate political negotiations.

These one-off souvenir architectural models formed just a tiny fraction of the Valadier workshop’s business, which focused on deluxe decorative arts of every stripe for the very most well-to-do.

In this, they extended the tradition of finely-wrought, Roman architectural miniatures begun by Luigi Valadier, though making these for a somewhat wider group. One no longer needed to be a king, general, or bishop to obtain a gleaming, gilded model of an ancient Roman monument.

Beginning in the first quarter of the 19th century, and continuing forward, money (a lot of it) became sufficient qualification.

By the 1810’s, Hopfgarten & Jollage’s trade in cast bronze souvenir architectural models had become fairly substantial. A May 19, 1818 license, granted to Jollage by the Roman cardinal Bartolomeo Pacca – the Cardinal Secretary of State – permitted the export of three gilded bronze architectural models: two columns and an obelisk (Fig. 1).

As before, with the Valadier models, the Prussians’ miniatures were often deployed as gifts to important people.

“It is reported that Mgr. Ferrieri is about to go as envoy from the Pope the to the Sultan. He carries with him the following presents: a gilt bronze model of the column of Trajan; a magnificent table of mosaic work,…”

At an 1870 concordat in Bavaria, the Pope presented the firm’s models of the Trajan and Antonine Columns to his German hosts. A mention in the volume Rome in the 19th Century (1826) records the range and skill of the Prussians’ work. “Hopmartic (sic) – a remarkably ingenious German – executes models in bronze of the Triumphal Arches, Columns, Ruins, Ancient Vases, & c. of Rome. He has executed a bronze model of Trajan’s Pillar, with the whole of the bas-relief, accurately copied – an extraordinary work.”

Of course, Hopfgarten & Jollage’s production most often found its way into the hands of well-heeled Grand Tourists, those who could best afford the expensive mementos, and for whom they might later have the greatest meaning – a gleaming model of some Rome monument on a grey, chilly, drizzling London afternoon, recalling a glorious, warm Roman morning, suffused in the golden Italian sunlight.

While material describing Hopfgarten & Jollage’s partnership is sketchy, we can infer the basic outline. They must have met in Berlin, where both were born, Benjamin Ludwig Jollage in 1781, Wilhelp Hopfgarten in 1789. Wilhelm’s family was artistic and a brother shared his interest in metal casting.

On his way to Rome, where he arrived by 1804, Hopfgarten spent two years in Paris. This was in the period immediately preceding the development there of foundry techniques permitting highly-detailed bronze castings, as well as advancements in the practice of fire-gilding the finished castings – a surface called ormolu.

It appears that Hopfgarten may have been more artistically and technically inclined than his partner Jollage, who may have been more instrumental on the business and marketing side of their shared enterprise. Hopfgarten much impressed the era’s leading, most famous sculptors, including Berthel Thorvaldsen and Christian Daniel Rauch. He cast important commissions for the former and was asked by the latter to join his studio, an honor Wilhelm declined.

Jollage’s name appears on documents which represent the firm. It appears he may have established and maintained relations with Church officials leading to commissions from these most important and influential of Roman clients.

This work included not just production of architectural miniatures but important conservation projects as well. For example, the firm was charged with the restoration of the bronze doors of St. Paul’s, as well as the repair of antique Roman lead piping and other hydraulic work.

The firm’s best-known work, though, remained its souvenir architectural models. These were distinctive for a variety of reasons, especially their remarkable, carefully-wrought detail.

The Prussian casters did not simply reproduce, in miniature, the ancient Roman monuments as they appeared in the early 19th century. Instead, these were modeled as they had appeared in antiquity. For example, Trajan’s Column, which in the early 1800’s (as today) was topped by a colossal figure of St. Peter, was instead portrayed with its original likeness of the Emperor. Hopfgarten & Jollage’s exactingly rendered casting of the Arch of Constantine is not flat-roofed, but surmounted by an elaborate, colossal figure of Roman horsemen, a charioteer and quadriga – just as it had appeared in antiquity.

Other details of their models are subtler. Their model of the Lateran Obelisk sits upon a base of Aswan Red Granite, part of the debris of the real Obelisk from the Temple of Amun in Karnak, erected in Egypt 3500 years ago, and brought to Rome by Constantius II.

This is not to say that all earlier work was in gilt bronze. The dimensions, casting quality, and details of the dark-patinated models of this Trajan’s and Antonine Columns offered here are alike with the firm’s ormolu examples. This points to their having been cast during the earlier part of the company’s history. And as we’ve seen, there is an 1848 record of a gilded bronze model of Trajan‘s Column, produced for the Pope, and carried by his envoy to a Sultan. This may have, by then, been an exception.

Hans Ottomeyer and Peter Proschel’s 1986 Vergoldete Bronzen pictures the gilded bronze pair of these columns in the collection of Munich’s Residenz, as well as a detail of the base of the Trajan’s Column model, which the authors date to 1817-1820.

Unsubtle is the luxe, ormolu finish of the firm’s earlier architectural miniatures – a technique Hopfgarten & Jollage may have learned during their time in Paris. There, and in Rome, bronze castings were fire-gilded – an amalgam of gold and mercury brushed onto the object, before being burnt off with a torch, leaving just the lustrous gold. This was a sumptuous finish, but the process was sufficiently toxic to be outlawed in Paris in the 1830’s. Fifty years later, the Parisian foundry Freres Le Blanc produced large, well-detailed, gilded bronze models of Trajan’s Column, replicas difficult to distinguish from Hopfgarten & Jollage’s pioneering accomplishments.

While the methodology of the gold finish is something Hopfgarten (and Jollage) may have learned in Paris, we wonder if the impetus to finish objects in this conspicuously lavish way may not have been Jollage’s. Jollage died in Rome in 1837, perhaps of cholera. Hopfgarten lived in Rome until his own death in 1860. After Jollage’s passing, it appears Hopfgarten continued working, probably into the late 1850’s.

While the firm’s earlier pieces are unmarked, after Jollage’s death some objects are inscribed “W. Hopfgarten Roma.” The latest of these discovered so far is dated 1856. As just discussed, the later figures, very often mythological subjects, are always dark-patinated bronze.

Prior to his death (1860), it appears Hopfgarten passed along his business to another Prussian, Adolf Dressler. From 1861, until his death in 1868, Dressler re-issued Hopfgarten & Jollage’s earlier work. These dark patinated bronze sculptures are very often marked “A. Dressler, Hopfgarten, Rome (date).” Next to take up the business was another German, E. Guttkorn, who by 1872 opened a shop, Guttkorn & Hopfgarten, in the Piazza di Spagna. His works, also dark patinated, are inscribed E. Guttkorn, Hopfgarten, Rome (date), and ceased production, it appears, no later than 1876.

Hopfgarten & Jollage’s remarkable architectural models are in the collections of the Biblioteca Ambrosiana, Milan; Palazzo Pitti, Florence; and Munich’s Residenz. 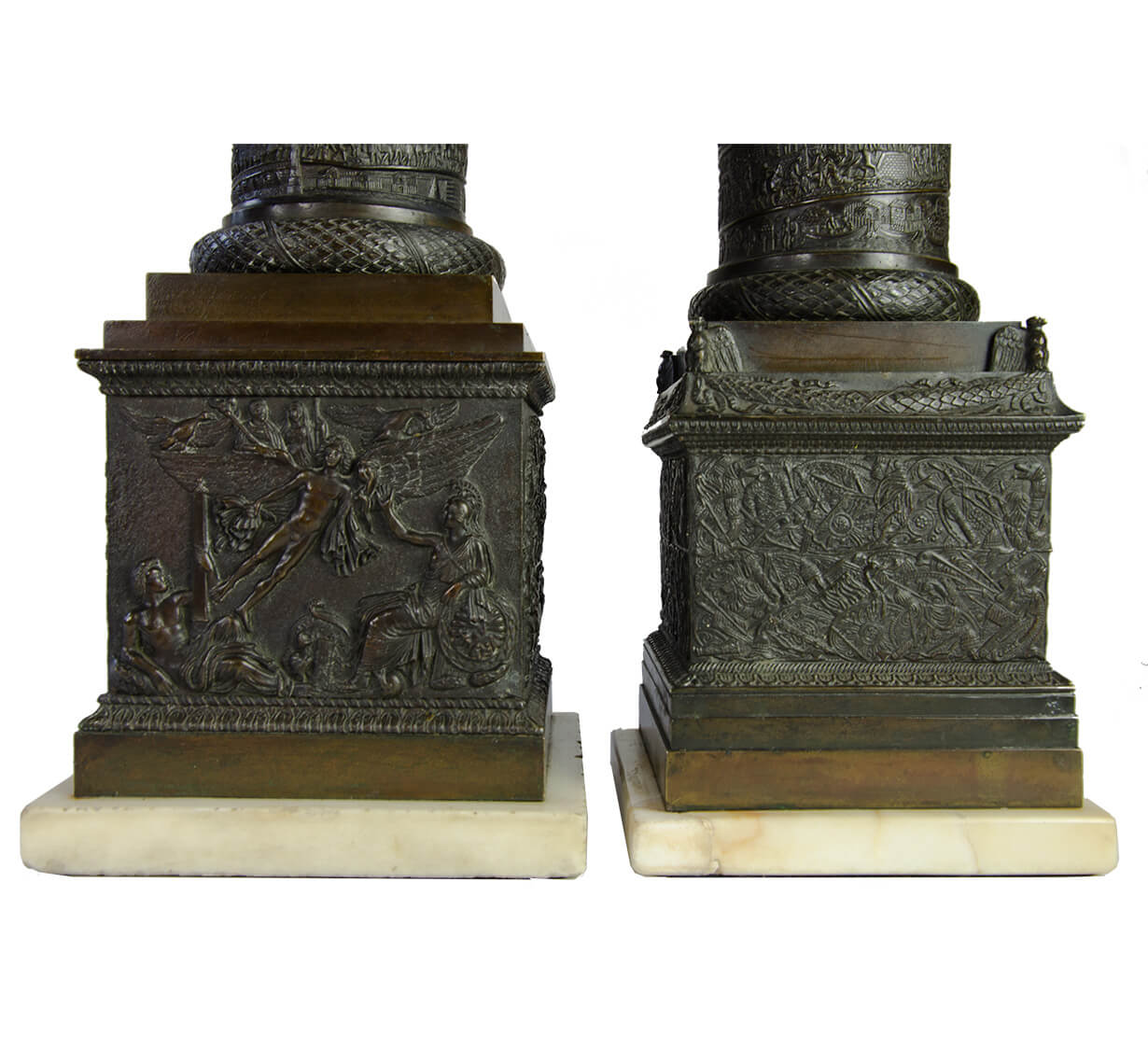 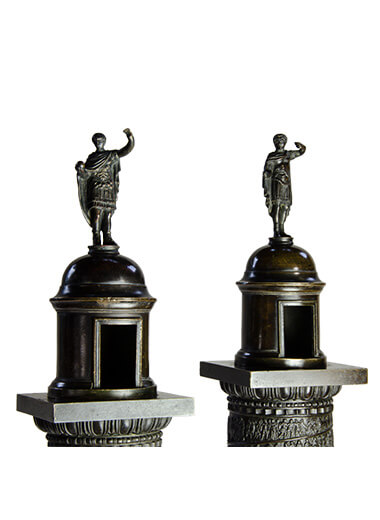 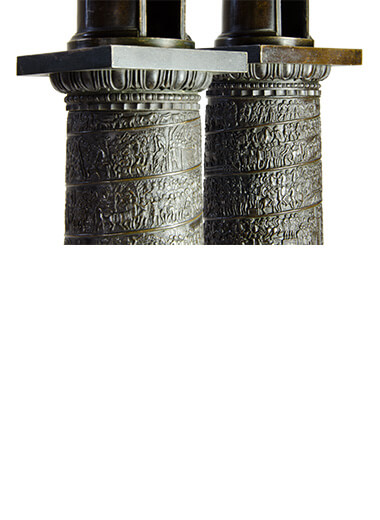