Designed in 1864 to commemorate a Prussian victory over Denmark. By 1873, when the monument was
dedicated, the country celebrated the additional defeats of Austria and France. With these, it was decided
to add the 27 foot tall, gilded bronze figure of Victoria at the column’s summit. The monument was cast by
Berlin’s Gladenbeck Foundry, which also produced very highly realized models of other important German
monuments.

The changes didn’t stop there. Originally located in Berlin’s Konigsplatz, adjacent to the Reichstag, in 1939
Hitler directed his architect, Albert Speer, to draw plans for the relocation of the monument to the center of
the Grossen Stein, a vast convergence of roads in Berlin’s Tiergarten District, in line with a new triumphal
route, on axis with and running through the Brandenburg Gate. For emphasis, Der Fuhrer, insufficiently
impressed with the monument’s monumentality, had Speer add 25 feet to the Column’s height, yielding
the 220 foot tall landmark we see currently. Today, the Column shaft is made up of four distinct sections,
including one added by Speer. 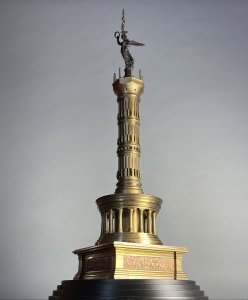 The offered model features three segments, identifying it as dating from
the period before the monument’s 1939 relocation, perhaps near the time of the Column’s dedication.
The model possesses the high level of detail and finish characteristic of German foundries in this period.
Note especially the remarkably precise, cast copper rendering of the monument’s bas-relief at the model’s base. 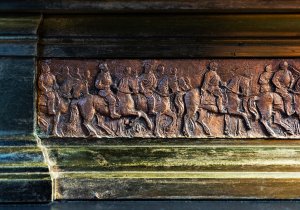 Many of these sorts of small, European cast metal decorative objects were lost to the depradations of World War.
After these conflicts, especially in Germany, there was little enthusiasm for preserving the models of monuments
whose meanings and memories had been taken over by humanity’s darkest impulses. What was one person’s victory
column oh-so-quickly transforms into another’s memento mori.