When we think of black stone models of ancient Egyptian obelisks, we think of the variety of nero antico marble replicas fashioned in Rome, generally in the mid-19th century.

However, by the first part of the 19th century – the 1820’s and possibly earlier – English artisans were at work on the same Classicizing subjects, and others, made from so-called Ashford Black Marble, quarried in Derbyshire. In fact a type of limestone, ‘Black Marble’ was employed in the making of a variety of decorative objects and ornament through to the century’s end.

In 1794, John Mawe co-founded a business near London’s Covent Garden, which included trade in objects made of Ashford ‘Black Marble.’ By 1800 he had established a ‘Free Museum’ at Matlock Bath in Derbyshire – in fact a store focused on goods in marble and other stones. He relocated the London shop to a tonier address – The Strand – in 1811.

Mawe died in 1829 and the business continued on much as before as a partnership between his wife Sarah and James Tennant, both expert mineralogists. Mawe and Tennant often marked their wares, either scribing their names into hard surfaces or adhering ornate paper labels. In the intervening two centuries, of course, these labels have largely fallen away.

Among the earliest of these objects made of ‘Black Marble’ were a group of well-made, highly-finished architectural models, especially of Egyptian obelisks. By 1828, Mawe had a Catalogue, featuring “Black Marbles of the finest quality,” including “correct copies of Cleopatra’s Needle, Bankes’s Obelisk with Greek inscriptions, the Obelisk at Helopolis and at Zan.”

The same Catalogue includes a list of architectural replicas apparently imported from Italy, including “Models of the Leaning Tower, Baptistery, and Cathedral at Pisa, Trajan’s Pillar, Scipio’s Tomb, and a great variety of smaller Articles.”

Why does Mawe’s list include only ancient obelisks still located in Egypt (or very recently moved to England directly from Egypt), rather than those imported to Rome? Part of the answer may have to do with the then current popularity in England of all things Egyptian. The Egyptian Revival, seen in the period’s Arts, Architecture, decorative arts, literature, etc., began with Napoleon’s recent conquest of Egypt, and, highly-organized, large-scale looting (is there another word?) of the range of ancient artifacts. When exhibited, these objects inspired a high-pitched fascination.

The Egyptian Revival in England was further fueled by Lord Nelson’s victory over the French in the Battle of the Nile in 1801 and by Egypt’s 1819 gift to Britain of the so-called Cleopatra’s Needle, then standing in Helopolis. Retailer Mawe, apparently, sensed an opportunity.

Mawes’ Catalogue from the 1820’s is paralleled by Tennant’s list, which includes obelisks into the 1870’s, though the latter’s interests in mineralogy began to predominate by the 1850’s.

Interestingly, the Heliopolis and Zan obelisks on Mawe’s list are, in fact, the same monument, located at the site of the ancient fortress of Zan (also called San or Tanis), in present day Heliopolis, along the Nile in what was, in Biblical times, Goshen, a region stretching from the Mediterranean, to the Red Sea. It was the land of Goshen that was given the Hebrews by Pharoah, and from which they fled during the Exodus. We doubt the Goshen Obelisk’s religious resonance was lost on Mawe.

This very handsome, Ashford ‘Black Marble’ model obelisk titled “Goshen,” is a replica of that obelisk, once called the Obelisk of On and today the Al-Masalla Obelisk.

The elaborate hieroglyphics above the base are accurately rendered, acid-etched into the underlying store. This etched surface, like the name “Goshen” on the base, was originally gilded, a very fragile finish, very much worn in the course of the last two centuries.

The Philae Obelisk, also called Bankes’ Obelisk, was carted to England by Giovanni Belzoni, and erected at William Bankes’ country house in Kingston Lacy, Dorset, in 1821. In addition to its considerable decorative value, this obelisk also possessed archaeological value, especially because the hieroglyphics carved into its shaft appeared reflected in the ancient Greek at the monument’s base. In this way, the obelisk reiterated some of what had been learned from the Rosetta Store, discovered in the Nile Delta 20 years earlier.

Accurately inscribed into the base of this model, like its subject, is what appears to be the entirety of this ancient Greek text. This writing, as you can see, is both extensive and very small.

The hieroglyphics above are also accurately rendered, though in a different way. Here, an impressive ‘mask’ has been applied to the shaft, which was later etched with fluoric acid. The unprotected areas, exposed to the acid, are thus subtly differentiated. Originally, these surfaces were gilded, a very fragile finish, of which just faint traces remain.

While ‘Black Marble’ models were fashioned by other shops in the area, the overall quality of this replica suggests an attribution to John Mawe.

Engraved into the base of this handsome, Ashford ‘Black Marble’ model is “Obelisk Called Cleopatra’s Needle at Alexandria.” The background of the above, on the shaft of the monument, is etched into the relatively soft stone. The etched surface has a matte finish, very subtly differentiated from the glossy surface of the hieroglyphic character.

It was only in 1878 that Cleopatra’s Needle finally found its way to London. Because the present model notes its location as Alexandria, temporary home to the monument before its sea voyage to England, it is likely this memento dates to the mid-19th century, or a bit before. Owing to slight differences with earlier Ashfield ‘Black Marble’ obelisks produced by James Mawe, this may have been made after Tennant took on the business in 1829. 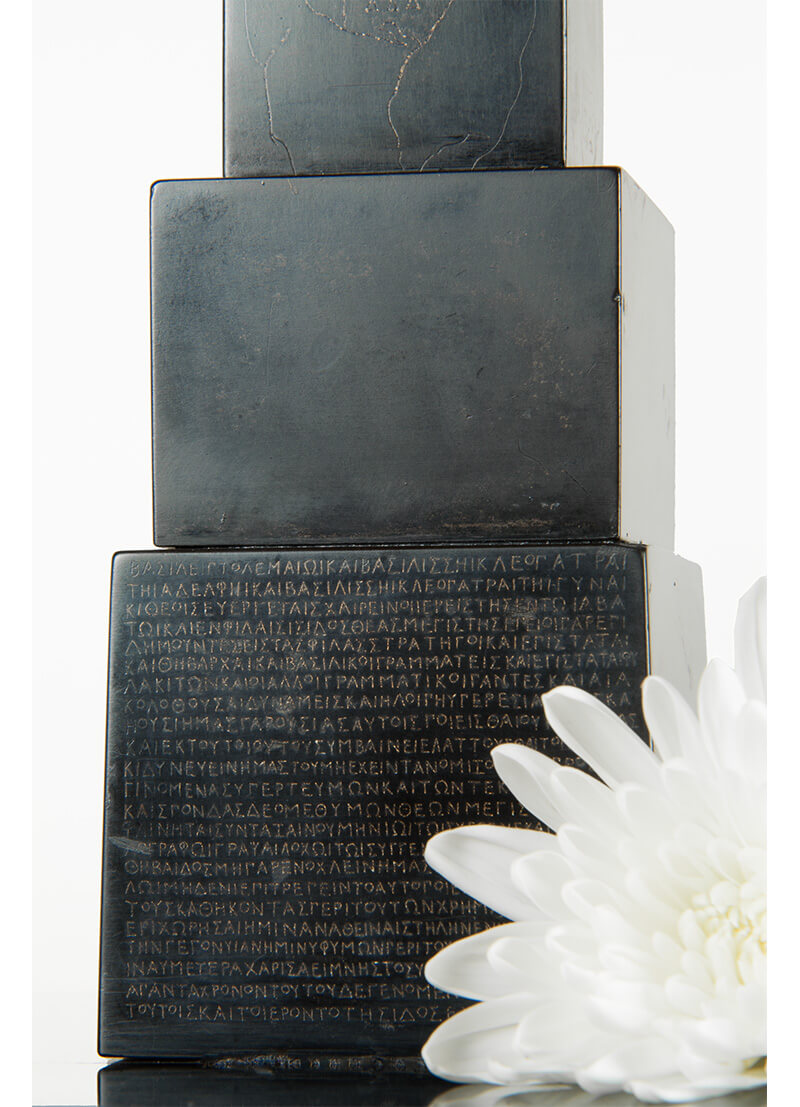 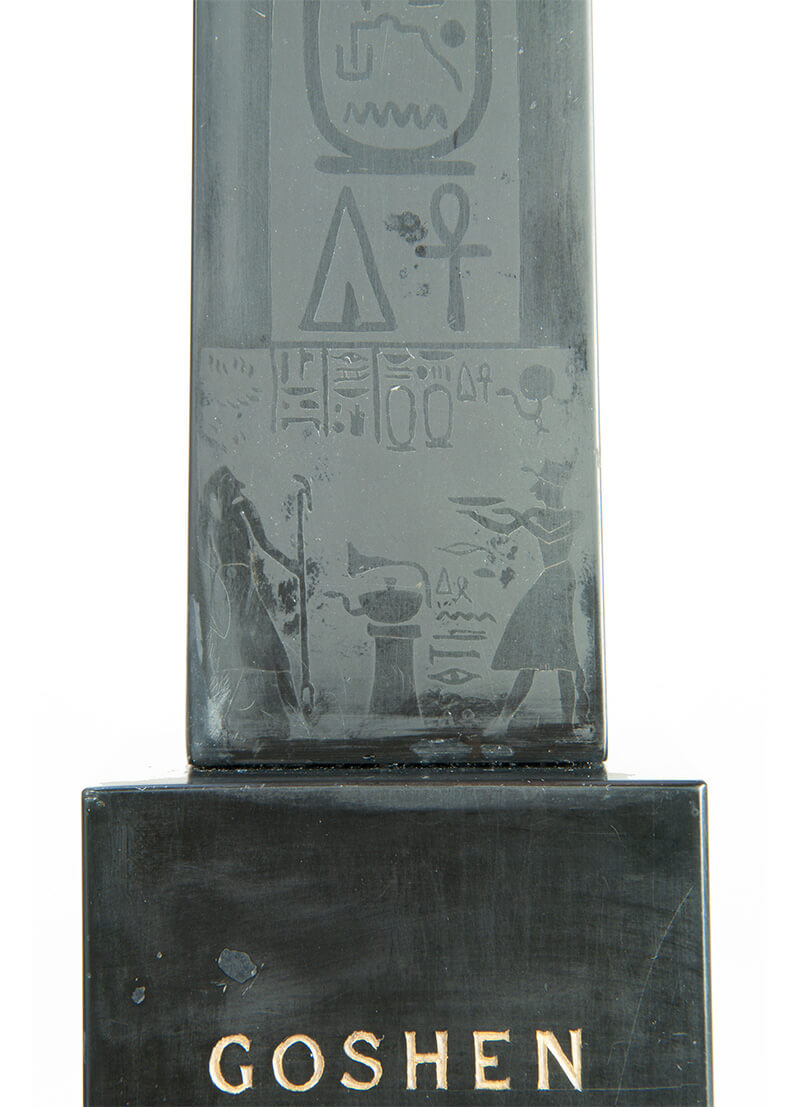