alexander at the tomb of achilles

This large, narratively and pictorially ambitious, 17th century, northern Italian capriccio pictures Alexander the Great at the tomb of Achilles. It’s a sprawling, complex scene; enigmatic, puzzling, unlikely, even as it recounts one of the best-known and oft told tales of the antique world.

Achilles, he of the famously vulnerable heel, Greek hero of the Trojan War, star of Homer’s Iliad, was, said Alexander, his forebear on his Mother’s side. (On his Father’s side, Alexander claimed Hercules an ancestor. Being descended from myth proved a lot to live up to, though the young man did his best.)

Plutarch, writing 350 years after the fact, in Life of Alexander, describes the young King’s visit to his relative’s Trojan tomb: “Alexander and his companions poured libations to the heroes, anointed the grave marker of Achilles, ran a race naked as is the custom, and then placed a wreath on the marker.”

More than fifteen centuries after Plutarch, this painting tells a tale more complex. A helmeted Alexander stands high on a ruined architectural fragment, while above him his men, opening the hero’s sarcophagus, offer up Achilles armor, including his famous bronze-headed spear and shield sporting the terrifying image of Medusa. Below, two others hold up the ancient warrior’s red robe.

To the right of the central action, an antique bronze group of the three Fates appears to be discussing the goings-on. Below this, figures on a ruined stone frieze are rendered nearly as lifelike as their warm-blooded counterparts. In the middle distance, the remains of a temple fashioned from black stone contrasts with the light hues of ruins in the foreground.

The entire scene is framed, on both sides, by the jagged, violently broken, tree trunks and limbs, of the sort often associated with the Neapolitan master Salvator Rosa.

The meaning in all this metaphor seems at once abundant and veiled.

In addition to the pictorial mysteries, there are other compelling questions, especially the identity of the artist, and date of this painting.

Historian David Marshall attributes this picture to the Monogrammist GAE – a 17th century, northern Italian ruins painter. Marshall’s 1996 article in Burlington Magazine – “Giovanni Ghisolfi or the ‘Monogrammist GAE’ at Stourhead?” – concerns twenty-two stylistically-related paintings, ten featuring variations of a difficult to decipher set of initials – the artist’s monogram. (Our picture, without the GAE initials, but including some intriguing marks discussed later, came to light, and was identified by Marshall, after the Burlington piece.)

Marshall suggests two possibilities for this group of similar pictures – that they are the work of the young, Milanese artist Giovani Ghisolfi (please see our earlier discussion of this painter), prior to his arrival in and acculturation to Rome, after 1650; or that they are works of another, likely northern Italian, probably late 17th century, ruins painter, influenced (somehow) by the work of Ghisolfi’s Roman maturity.

The evidence runs both directions. Marshall mentions the picture’s flora which, he writes “is of a wild, Rosa-esque type which Rosa himself was developing only in the 1640’s.” Our picture’s foliage is considerably more “wild,” more “Rosa-esque,” than that in any of the article’s illustrated paintings. Perhaps there’s a clue here.

Also, as Marshall points out, “no securely attributed work by Ghisolfi bears the GAE monogram.”

If the author and date of this ‘Alexander at the Tomb of Achilles’ remains obscure, we can be certain that it is among the earliest paintings of the subject, one pursued, along very similar lines, by the greatest architectural ruin painters of the 18th century – Gian Paolo Panini, Niccolo Servandoni, Antonio Joli, and Hubert Robert, among others.

Works given to the Monogrammist GAE are in the collection of Stourhead House, Wiltshire, England: Nieborov Palace, Poland; and National Gallery of Scotland, Edinburgh. Pictured in Giancarlo Sestiari’s 2015 Il Capriccio Architettonico:in Italia nel XVII e XVIII secolo, Rome: Vol II, figure 4, p. 94. Sestieri discusses this picture further in Vol II, p. 428, “This latter picture, although not monogrammed, constitutes one of the absolute masterpieces by the master “GAE” (fig. 4) for the complex invention with background landscape of pure rosiano flavour and the dynamic articulation of the characters, including the grim figures of the three fates, with the only Atropos characterized by her scissors.”
. 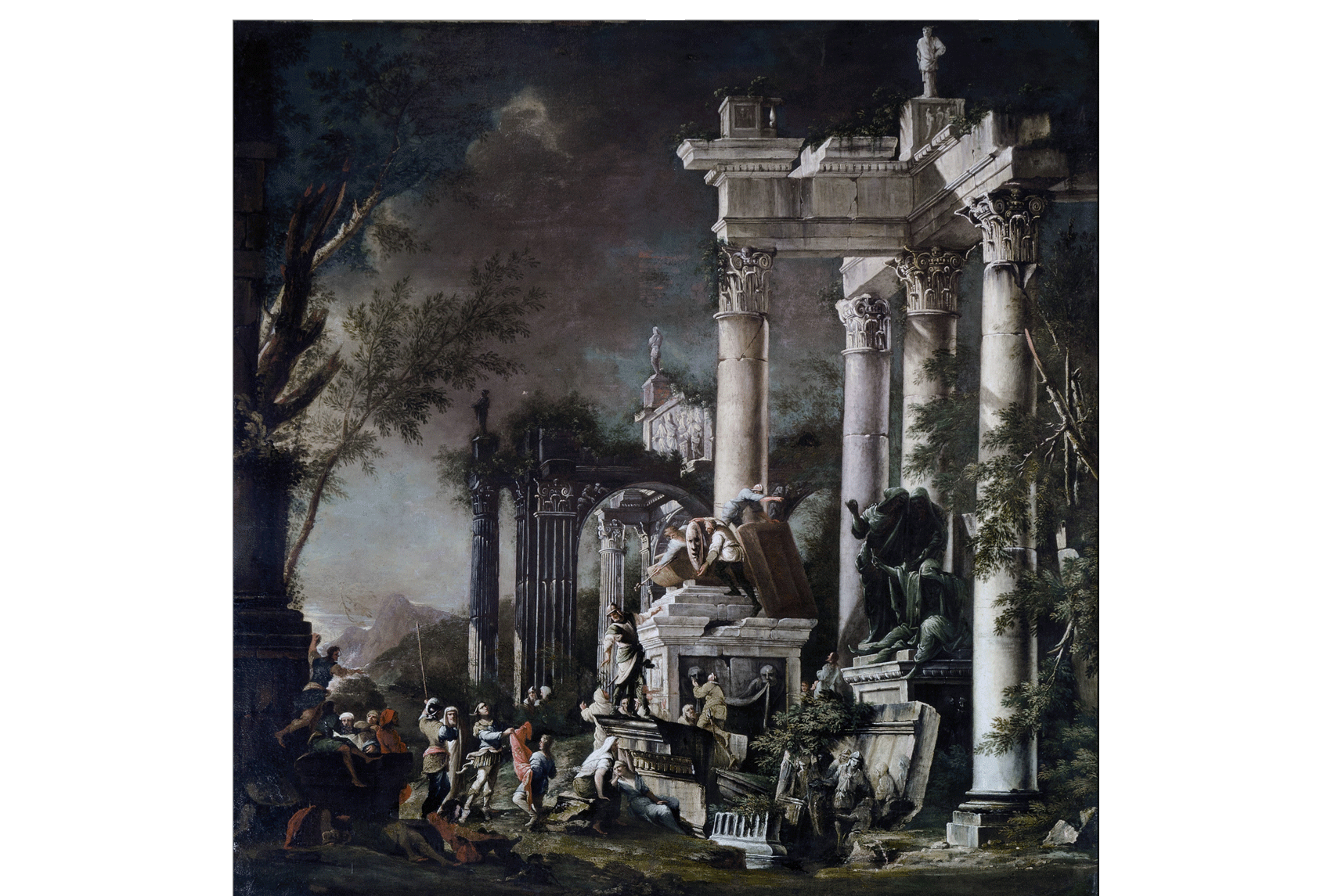