This impressive, peerlessly executed bronze model of the monument at the center of Rome’s Michelangelo-designed Piazza Campidoglio is among the concluding works of the city’s leading founders of souvenir architectural models, Prussian émigrés Wilhelm Hopfgarten and Ludwig Jollage. Unlike others of the firm’s exquisite miniatures, which were often in gilded bronze, it appears this replica was produced solely in this rich, dark patina.

We believe this model dates prior to Jollage’s death in 1837. Subsequent castings are engraved “W. Hopfgarten, Roma,” and later still, with the name of the successor firm, Hopfgarten and Dressler. There is no more detailed model of this ancient monument. Note the crisp, tight curls of Aurelius’ hair and elaborate folds of his toga. Note, even, the folds in his mount’s skin and protruding blood vessels at his chest.

The cityscape of ancient Rome featured a great number of equestrian monuments. However, that of Maucus Aurelius was the only one not to be melted down, owing, say historians, to a cretin’s mis-identifying the Emperor as the Christian Emperor Constantine.

The ancient statue sits upon a base designed by Michelangelo, a piece of mesmerizing suavery carved along its two long sides with Latin text. The model repeats not only the text, but also the method of its inscription. The gently-curving surfaces on which this text is written are, in fact, separate bronze plates mounted to the reverse of their respective “windows.” When we inspected the interior of its base, we noted the reverse sides of these plates were also inscribed with the identical text, though not, apparently, to the exacting standards of Hopfgarten and Jollage.

Bronze models of this monument appear as early as the 15th century, the most notable of these early examples being those cast by the Florentine artist Antico. All of these, though, were relatively miniature miniatures, just a few inches tall. This model, owing to its impressive presence, leads viewers to experience something of the emotional, as well as intellectual, force of ancient Rome. 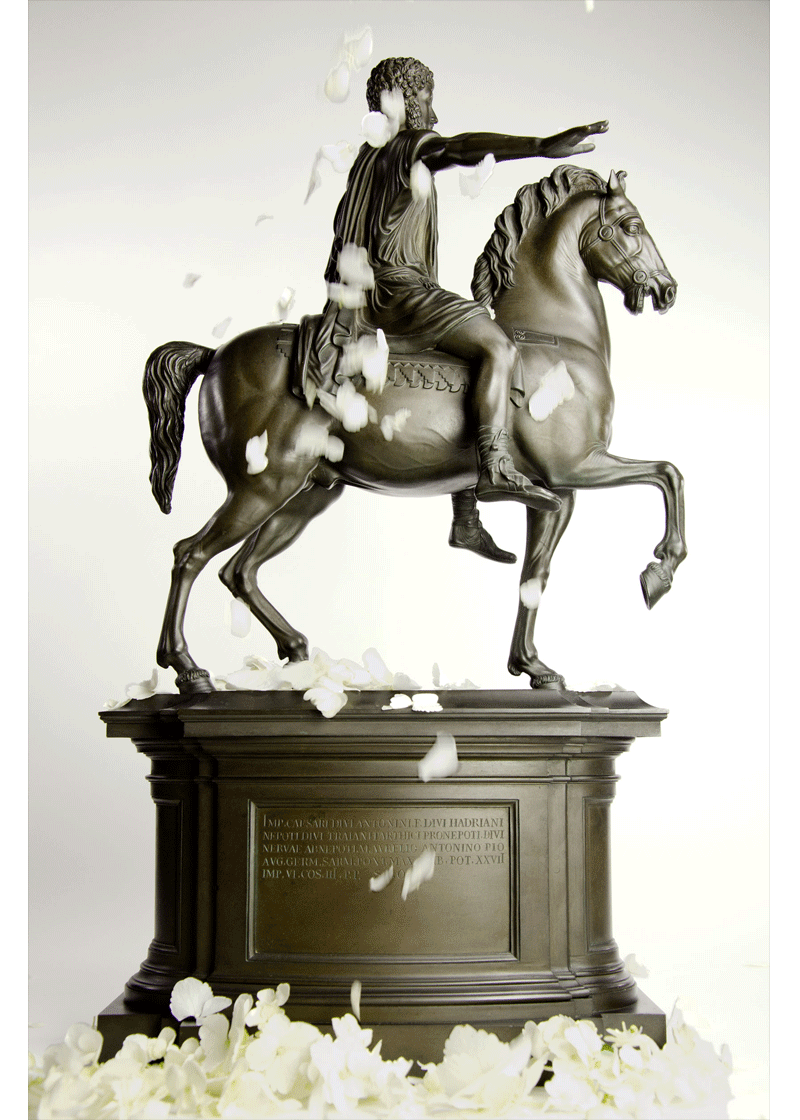 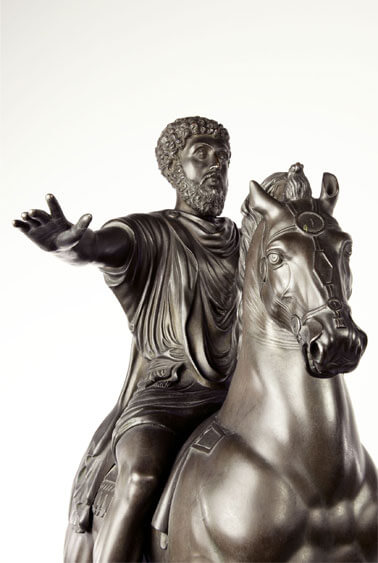 Right: The Equestrian Statue of Marcus Aurelius depicts his triumphant return from war. Though many other Roman emperors and other dignitaries had equestrian statues, the rest were destroyed by the Christians. This statue survived, installed adjacent to San Giovanni in Laterano in Rome, because it was thought to represent Constantine, the first Christian emperor of Rome.

Middle: Like most of the later Roman emperors, Marcus Aurelius strove to legitimize his reign by making reference to Augustus, the first, and in most ways greatest, of the Roman emperors. His pose with the raised arm bears a strong resemblance to a well-known statue of Augustus.

Left: Michelangelo’s base is oval, like his plan for the surrounding Campadoglio piazza, the site for this iconic statue.