In the late 17th, across the 18th, and into the 19th century, a visit to Italy, especially Rome, came to be, for some, an important part of their cultural and social educations – an experience part of the Grand Tour. This phenomenon extended to artists, as well, though in very different ways. Aspiring painters, sculptors, architects, and others came to Rome less for acculturation and more to gain direct exposure in the studios of the period’s acknowledged masters.

While the Grand Tour might occupy many months, perhaps a year or more of a young man’s (or, eventually, young woman’s life), some artists, upon visiting Rome, never returned home. Jan Frans van Bloemen, born in Antwerp in 1662, was a pupil there of well-known painter Antonio Goubau, who had lived in Rome from 1644-1645. Van Bloemen’s older brother, Pieter, reached Rome in 1674, where he was joined by Jan Frans in 1689, and a year later, by their youngest brother, Norbert. All three were accomplished painters, with Pieter, for a time, the most well-known. Pieter and Norbert eventually returned home. Jan Frans, after visiting Naples, Sicily and Malta with Pieter, never again left Rome.

Unlike other Roman painters, he followed in the direction of Claude Lorraine and, especially, Gaspard Duguet, painting serene, Classicizing landscapes, set in the Roman countryside, or campagna, featuring panoramic natural landscapes, inhabited by small, oftimes toga-attired men (philosophers) in deep discussions, with the picturesque outline of some ancient town and/or ruins beyond. In time, Jan Frans came to be called ‘Orizzonte,’ for the wide breadth of his landscapes, reading along the horizon. His brother Pieter had been called ‘Lo Standardo,’ the banner, for reasons future research will make clear. What must Lo Standardo have thought when his fame was surpassed by Orrizonte’s, who, by the second decade of the 18th century, was thought the greatest landscape painter in Italy? The three brothers were members of the Bentuveghels, the fraternal order of Netherlandish painters in Rome. Gaspar van Wittel, member of the order, and a famed painter then as now, was godfather to Jan Frans’ firstborn son.

This picture is a fully characteristic example of the painter’s mature, late production. In the foreground, a natural landscape dotted with ruined architectural fragments, with two men in Classicizing dress in discussion, highlighted by the sun. In the background is the picturesque profile of an ancient town. Beyond this, the distant landscape and blue sky, white clouds scudding past. It’s a serene, fresh, concordant scene of the campagna. Note, though, in the right foreground the base of a broken tree branch – van Bloemen’s mild experiment with the sort of wild, dangerous landscapes of Salvator Rosa (1615-1673), whose work Jan Frans must have known. We’ve located very few other similar examples in the painter’s oeuvre.

On the other hand, the various architectural elements of the town are here reassembled from those of other pictures, much as Panini mixes and matches various, familiar ruined monuments in his later pictures. The town also includes elements from Rome’s Forum – the single pillar at the center resembles the Phocas Column; the arched gateway is derived from the Arch of Titus, as it appeared before its restoration c. 1820; the castellated tower with battered walls at the picture’s center is visible today at the Forum’s northwest edge, beyond the Arch of Septimius Severus.  And is that a hint of Colosseum in the far distance?

Von Boemen’s paintings were much esteemed by both Grand Tourists and Italian aristocrats. “Beautiful pictures done in such beautiful sites, with verdant foliage, limpid silver water, and with an agreeableness of colors; accompanied by small figures of the utmost gracefulness, with rural dwellings and ruins; all so well assembled, that his pictures were welcomed into all the galleries of Italy,” wrote Nicole Pio, in her 1724 “Le Vite de Pitrori, Sculteri of Architetti.” Historian Anthony Clark, writing in 1970, described van Bloemen “the Canaletto of the idea of the Roman campagna.”

Paintings by van Bloemen are in the collections of The Hermitage, St. Petersburg; Kunst Historisches Museum, Vienna; and the Louvre. 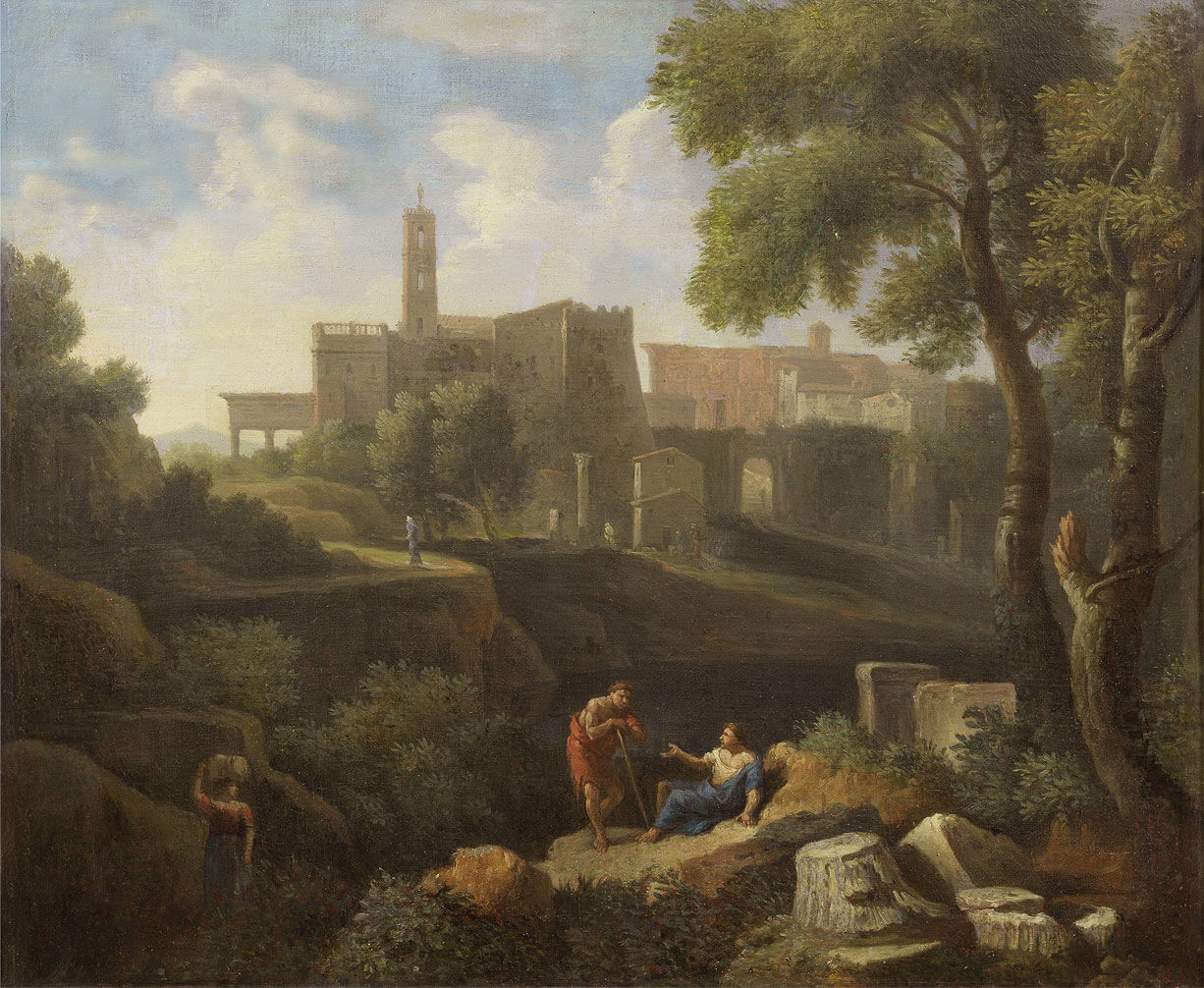