Hubert Robert received a Classical, artistic education in Paris, before setting out for Rome in 1754, in the entourage of the new French ambassador, the Duc de Choiseaul. Over the next dozen years, he befriended Piranesi (no easy task!), was capriccio master Gian Paolo Panini’s (1691 – 1765) favorite studio assistant, and embarked on drawing expeditions with countryman and artist Jean-Honore Fragonard (1732 – 1806). Robert, by all accounts, exceeded in both talent and charm.

Robert’s time with Panini was especially influential, and Robert des Ruines’ (the name given him by social critic Denis Diderot [1713-1784]) views of fantastical, almost always Roman, architectural ruins and landscapes form the heart of his oeuvre.

Returning to Paris in 1765, his work was an immediate success, and he became a regular contributor to the prestigious annual Salon.

Robert ingratiated himself with French royalty, though at a time when these could prove perilous friendships. Robert collaborated on The Queen’s Hamlet, a picturesque park at Versailles in 1783. His client? – Marie Antoinette (1755-1793). During the French Revolution, the painter found himself in prison. At the same time, his Queen met Monsieur le Guillotine, an acquaintance Robert is reported to have escaped only due to a bureaucratic bungle.

Two years later he was made Curator of the Louvre and in 1803 Louis XVI appointed Hubert Robert Keeper of the King’s Pictures.

This unusually large drawing by Robert dates to early in his career, its technique and style similar to works from the mid 1750’s, which is to say not long after his arrival in Rome. The figures, based on 17th century pictures by Salvator Rosa, and paintings by Gian Paolo Panini, in whose studio he prospered, reflect this early period.

This type of picture – a long, ruined, Classical gallery – regularly occurs in works of Robert’s maturity, perhaps most famously in his 1796 Imaginary View of the Grand Gallery in the Louvre in Ruins, painted the year after he was made the Museum’s Curator. It’s a dark image for the normally sunny French artist (fig. 1). Perhaps the recent Revolution, and his own close scrape, painted a different sort of picture. 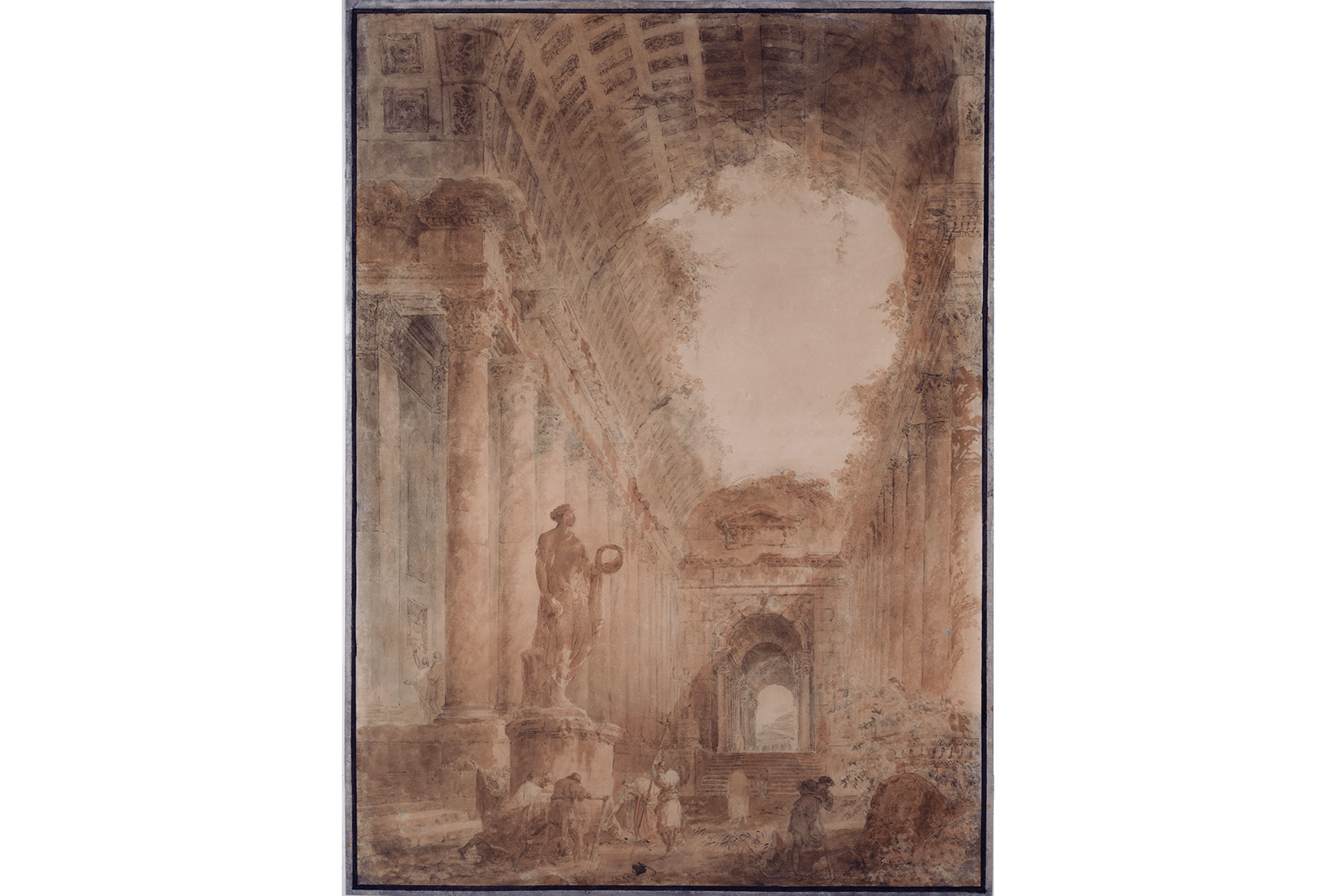