When we think of 18th century Italian architectural painting, we think first of Gian Paolo Panini, the pre-eminent, hugely influential, prolific, and most successful painter of Roman views, both real – vedute essate – and imaginary – vedute ideate. His work was was the first to blur the line between the two types of views, often picturing real buildings and monuments in imaginary settings, and to very great picturesque effect. One especially abundant picture, a favorite of ours, features the Arch of  Titus, Pyramid of Caius Cestius, Temple of Vesta (in Tivoli!), Pantheon, and Lateran Obelisk, though these landmarks, in reality, are nowhere near each other or, in one case, even in the same city!  As unlikely as this group is, the picture provides a powerful, memorable view of Roman antiquity.

Born about 1691 in Piacenza, Panini was perhaps trained in Bologna by one of the Galli Bibiena, a family famous for exuberant quadratura (architecturally illusionistic) stage design. By 1711 the young painter reached Rome, where he studied figure painting with Benedetto Luti.

Panini’s career rapidly accelerated. In addition to architectural views, very popular with Grand Tourists, he painted vedute of festivals, ceremonies, and the visits to Rome of a range of notable figures. By 1719, Panini was accorded membership in the Congregaziione dei Virtuosi al Pantheon and Accademie di San Lucia. Among his famous clients was the Pope.

During this period, he assembled a large, talented workshop, which saw to the precise carrying out of Panini’s painting designs. Unlike other vedutistas, Panini painted his own figures. Said to be his favorite assistant was the Frenchman Hubert Robert, whose later successes with pre-Romantic architectural views, in both Rome and Paris, built directly on his time with Panini.

Our picture is an unusual, early, imaginary architectural view by the master of 18th century Roman vedute. Unlike later work, the pictured ruins are related to, but not identical with, well-known Roman monuments. For example, the temple just beyond the arch – with its dome and triangular, pedimented roof supported on columns – suggests the Pantheon, though it is hardly a faithful representation. Other elements, including the deftly-handled jumble of ruined architectural elements in the foreground, resting in a pool of water, are among the painter’s signature devices.

With its strong upper right to lower left perspectitval arrangement, the picture may be compared with numbers 114, 262, and others in Ferdinando Arisi’s Gian Paolo Panini e i facti della Roman del ‘700.

Of a nearly identical painting sold several years ago, both Arisi and historian Giancarlo Sestieri suggested the work was from early in Panini’s career, perhaps ca. 1715, after his arrival in Rome in 1711.

Of course, the most striking feature of this picture (as well as its near twin) is that it is unpopulated. Sestieri suggests these canvases may be incomplete, an intriguing possibility.

Panini’s paintings are included in the collections of the Hermitage, Louvre, and Prado. 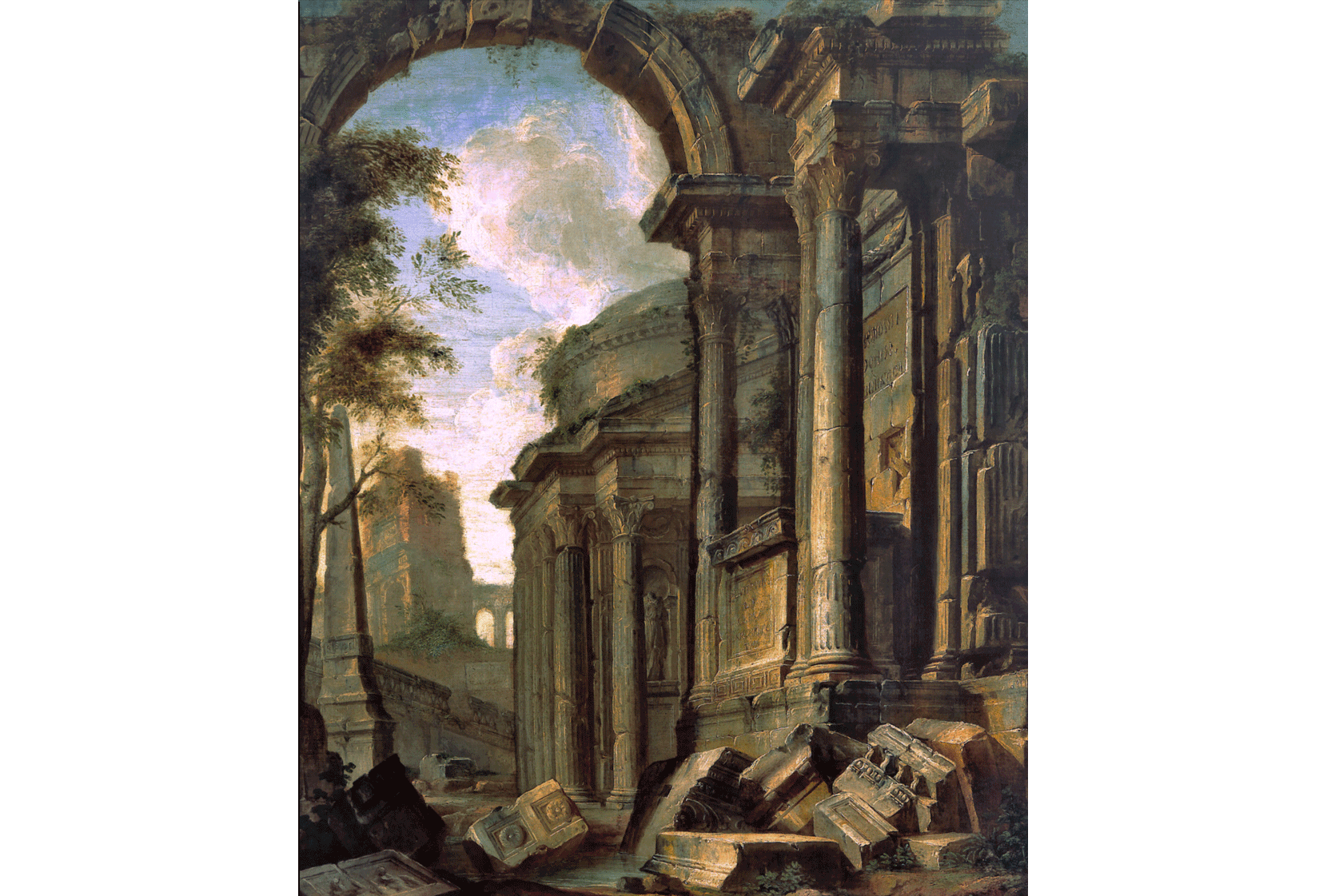