Gian Paolo Panini, pre-eminent 18th century painter of Roman ruins, was sufficiently successful that, in the later part of his career, he assembled a studio of other painters to assist in turning out the type and volume of pictures required to meet the interests of the period’s Grand Tourists. These painters were adept at working in their master’s style. Still, as he had done before the enterprise became successful, Panini prepared sketches showing a picture’s extended directions, as well as later overseeing their execution and himself adding important elements. With significant work, Panini painted without assistance, just as he’d done earlier in his career.

While his sketches, from rough to more finished, occasionally reach the market, the drawing offered here is a very different matter. Unlike the sketches, prepared to abet the making of a painting, this drawing was intended as a finished artwork. Among the works in Sotheby’s January 2013 Giancarlo Baroni sale were several similar Panini drawings. The ‘Catalogue Note’ for one of these records –

“This handsome capriccio, in which Panini has crowded but elegantly balanced ancient architecture and sculpture, does not seem to relate to any painted composition by the artist. The demand for finished drawings such as this was very high among 18th-century collectors and Panini’s views were expensive. In 1739 the Marchese Capponi appears to have paid 200 scudi for his drawing of the Palazzo della Consulta, Rome, whereas an oil by Vanvitelli cost only around 15 scudi. Panini’s drawings were treated like paintings, and were often framed and hung on the wall.”

This exquisitely-rendered view, like those in the Baroni sale, corresponds to no work painted by Panini, and is, in fact, a relatively novel composition for this artist. A circular ruined temple, presumably to Minerva who sits in front, aloft, possesses a domed interior, like that of the Pantheon. In the foreground, four figures, in modest dress, converse. In the distance are an obelisk and arched arcade. To the lower right, a seated lion spits water into the adjacent basin – a device often employed by the earlier Roman capriccio painter Giovanni Ghisolfi (1623 – 1683), a more than occasional source for Panini.

To the lower left, below Panini’s autograph initials – G. P. P. – is the collector’s stamp of Jean de Cayeux (Lugt 4461), a Parisian art dealer and critic who studied at the Ecole du Louvre before taking on the family art gallery on Rue des Faubourg Sant-Honore. He was particularly interested in the paintings of Frenchman Hubert Robert (1733-1808), who had, early in his career, been an important member of Panini’s studio. Cayeux’s gallery organized the 1957 exhibition, Hubert Robert et Louis Moreau, An Album de Croquis d’Hubert Robert in 1979 (in Geneva) and Rome 1760-1770, Fragonart, Hubert Robert et Leurs Amis in 1983.

Cayeux devised his collector’s stamp in 1966, to denote drawings that had passed through his gallery. 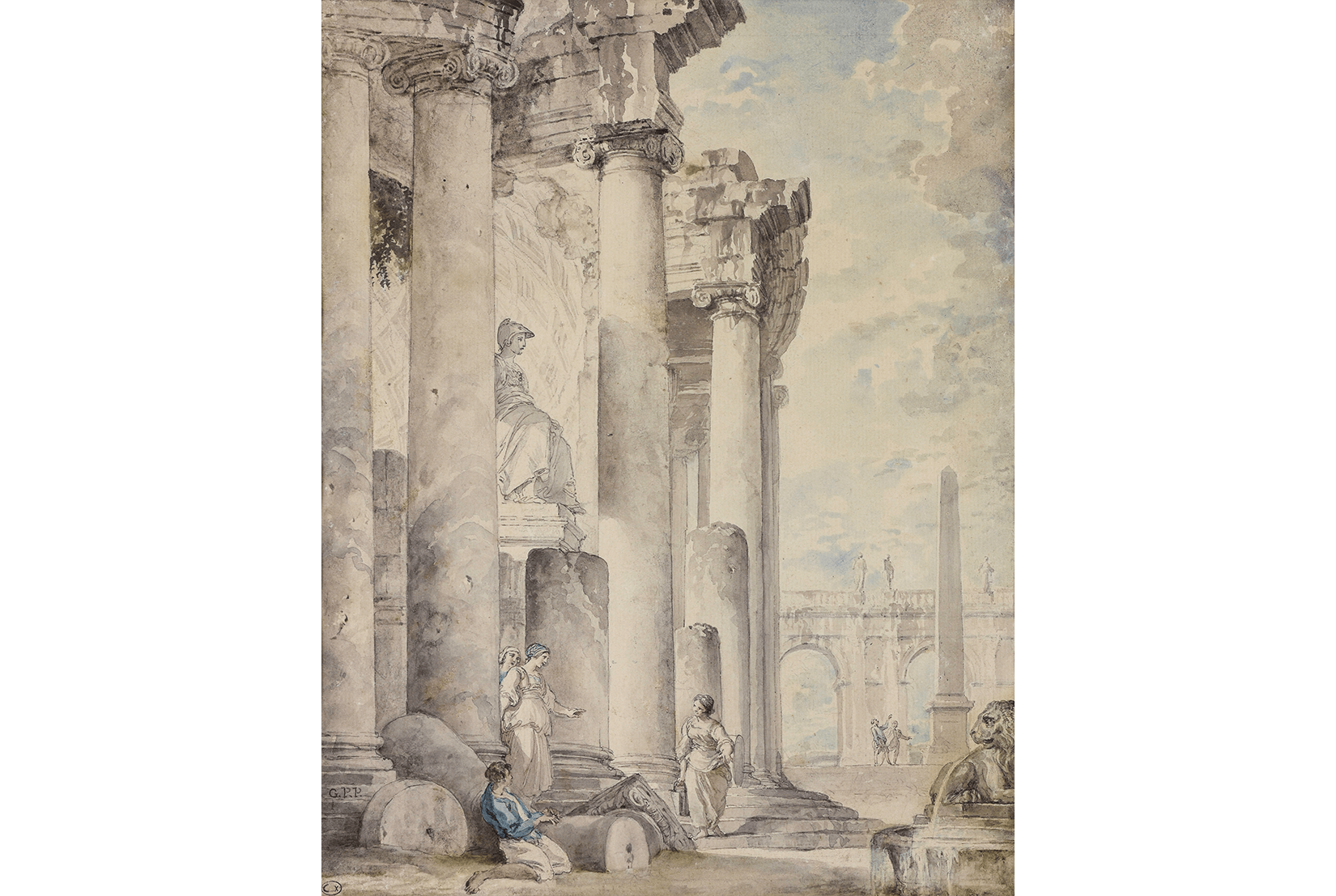