When we think of artists, we very often think of artistic temperament – that more or less roiling, contradictory stew of traits including creativity and tempestuous emotionality; savviness and naivete; self-dramatizing, self-aggrandizing, self-regard and low self-esteem; didactic moralizing and decadence; living a disaffected life at society’s fringe and striving for commercial success. For many of us, the experience of Art is, in fact, inseparable from our idea of its Artist. Who, looking at a Picasso, does not think of Picasso?

Some astute Art historians have pointed out that the idea of artistic temperament is, in fact, a Romantic era affectation and that prior to the late 18th century, artists generally thought themselves less melancholic prodigies than simple businessmen, exchanging goods for money. In this model, I suppose, Michelangelo’s ‘agony and ecstasy’ would be closer to “discomfort and delight,” a plot line impossible to accept.

In fact, Art has always possessed more than its fair share of gloomy geniuses and tormented talents, even if they have proved the exceptions proving the rule, rather than the rule itself. Piraneseum offers a range of pictures painted by high-spirited dark souls. A favorite group includes many of the capricci painted by Neapolitan artists near the turn of the 18th century, a garrulous, more than a little inelegant crowd, who nonetheless could paint like the Devil. Within this group were two artists – Leonardo Coccorante and Pietro Cappelli – who hated each other sufficiently so that contemporary accounts record their blood feud. Today, it pleases us (though perhaps not the painters’ shades) to hang their pictures side by side.

Among Piraneseum’s pictures are only two made by suicides – a lovely pair of posthumous etchings by Marco Ricci, who arranged to die like a knight, and this exquisite gouache of the Tomb of Caecilia Metella, on Rome’s Appian Way, by Carl Ludwig Hackert, who died by his own hand in a manner unrecorded.

Carl Ludwig was the second of five Hackert brothers, all artists, whose father was a Berlin painter. The oldest son, Phillip (Prenzlau 1737 – 1807 Florence) became a very famous artist, painting for royal patrons across Europe. He traveled to Naples in the late 18th century, before settling in Rome, where he was joined by Carl Ludwig in 1772. The three younger Hackerts also visited Phillip in the Eternal City. Phillip encouraged Carl Ludwig’s work in oil and gouache, and the second son soon produced several Roman and Italian views, including the offered painting in 1777, before decamping to France and Switzerland in 1778.

Perhaps his best-known painting, completed in August, 1781, pictures the Mer de Glace (Sea of Ice), at Montenvers, in France. In 1818, Mary Wollstonecraft Shelley, in the company of husband Percy Bysshe, visited the place, describing it as “the most desolate place in the world,” and included it as a setting in Frankenstein, establishing beyond doubt the scene’s Romantic bona fides.

That desolation brought forth Carl Ludwig’s best work. Remote from his family, overshadowed by his far more famous brother, charting his own course (as second sons are said to do) he landed far afield, on his own, without a clientele for his skillful painting. Unlike Rome, with its torrent of Grand Tourists eager to shell out for captivating pictures of the city’s views, Morges, Switzerland, where Hackert eventually took his own life in 1796, was no tourist destination.

Painted in sunnier days, Car Ludwig’s highly-wrought picture of the Tomb of Caecilia Metella, along Rome’s Via Appia, is expertly, precisely, delicately rendered, colorful, a thorough pleasure; showing the landmark as it was in the later 18th century, before today’s overgrown landscape; the antithesis, even then, of “the most desolate place in the world”; proof, perhaps, that artistic temperament may accumulate over time, rather than bursting forth full force. 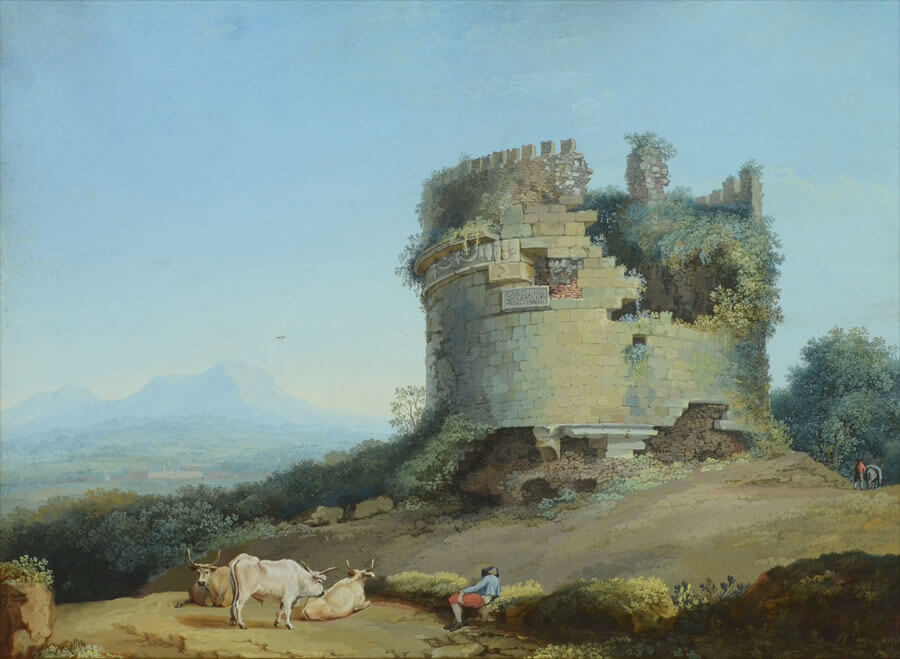